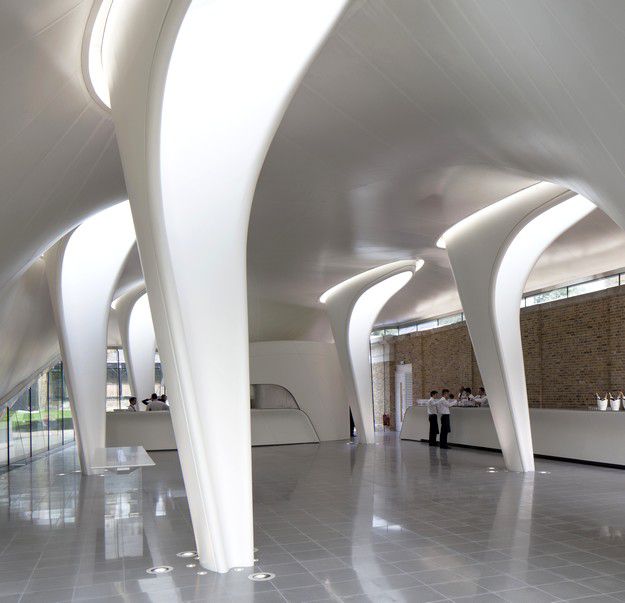 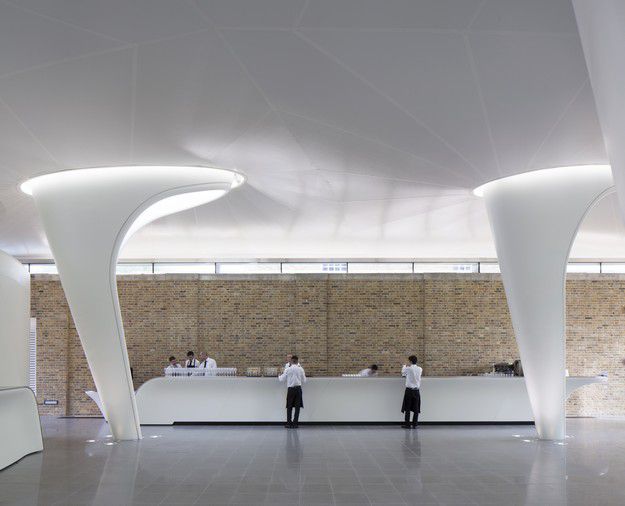 « The Serpentine Sackler Gallery consists of two distinct parts, namely the conversion of a classical 19th century brick structure – The Magazine – and a 21st century tensile structure. The Serpentine Sackler Gallery is thus – after MAXXI in Rome – the second art space where Zaha Hadid Architects have created a synthesis of old and new. The Magazine was designed as a Gunpowder Store in 1805. It comprises two raw brick barrel vaulted spaces (where the gunpowder was stored) and a lower square-shaped surrounding structure with a frontal colonnade. The building continued to be in military use until 1963. Since then Royal Parks used the building for storage. The Magazine thus remained underutilised until now. Over time, much amendment and alteration has occurred inside the historic building and its surroundings.

Instrumental to the transformation into a public art gallery was the decision to reinstate the historic arrangement of the Magazine building as a free standing pavilion within an enclosure, whereby the former courtyards would be covered and become internal exhibition spaces. In order to reveal the original central spaces, all nonhistoric partition walls within the former gunpowder stores were removed. The fl at gauged arches over the entrances were reinstated whilst the historic timber gantry crane was maintained. Necessary services and lighting were discreetly integrated as to not interfere with “as found” quality of the spaces. These vaults are now part of the sequence of gallery spaces. The surrounding structure has been clarifi ed and rationalized to become a continuous, open sequence of exhibition spaces looping around the two central powder rooms, thus following the simplicity and clarity of Leo von Klenze’s Glyptothek as an early model for a purpose built gallery. What was a courtyard before, became an interior top-lit gallery space. Longitudinal roof lights deliver natural daylight into the whole gallery sequence surrounding the central vaults and with a fi xed louver system they create perfectly lit exhibition spaces. Retractable blinds allow for a complete black-out of the galleries. The continuous sky-light makes the vertical protrusion of the central core of the building (containing the two vaults) legible on the inside. These reconstructions and conversions were designed in collaboration with heritage specialist Liam O’Connor and in consultation with English Heritage and Westminster City Council. In addition to the exhibition spaces the restored and converted Magazine also houses the museum shop and offi ces for the Serpentine’s curatorial team. The extension contains a generous, open social space that we expect to enliven the Serpentine Sackler Gallery as a new cultural and culinary destination. The extension has been designed to complement the calm and solid classical building with a light, transparent, dynamic and distinctly contemporary space of the 21st century. The synthesis of old and new is thus a synthesis of contrasts. The new extension feels ephemeral, like a temporary structure, although it is a fully functional permanent building. It is our fi rst permanent tensile structure and realization of our current research into curvelinear structural surfaces. The tailored, glass-fi bre woven textile membrane is an integral part of the building’s loadbearing structure. It stretches between and connects a perimeter ring beam and a set of fi ve interior columns that articulate the roof’s highpoints. Instead of using perimeter columns, the edge beam – a twisted ladder truss supported on three points – dips down to the supporting ground in front, in the back, and on the free west side. On the east side this edge beam (and thus the roof of the extension) swings above the parapet of the Magazine. A linear strip of glazing gives the appearance that the roof is hovering above the Magazine without touching. The Magazine’s western exterior brick wall thus becomes an interior wall within the new extension without losing its original function and beauty. This detail is coherent with the overall character of the extension as a ‘light touch’ intervention. 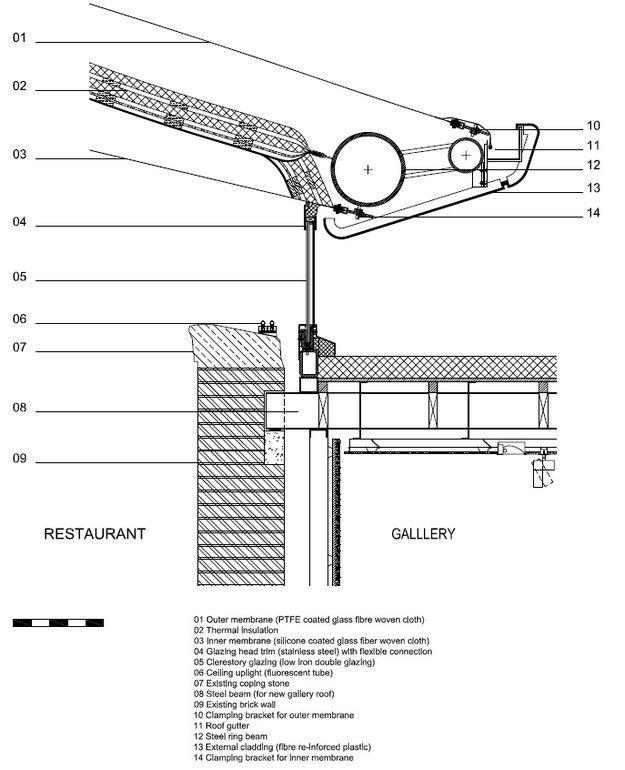 The envelope is completed by a curved, frameless glass wall that cantilevers from the ground to reach the edge beam and fabric roof. The interior of the new extension is a bright, open space with light pouring in from all sides and through the 5 steel columns that open up as light scoops. The anticlastic curvature of the roof animates the space with its sculptural, organic fluidity. The only fixed elements within the space are the kitchen island and a long smooth bar counter that flows along the Magazine’s brick wall. The tables, banquets and chairs are designed as a continuous Voronoi pattern, reminiscent of organic cell structures. Our aim is to create an intense aesthetic experience, an atmosphere that seems to oscillate between being an extension of the delightful beauty of the surrounding nature and of being an alluring invitation into the enigma of contemporary art. » Zaha Hadid 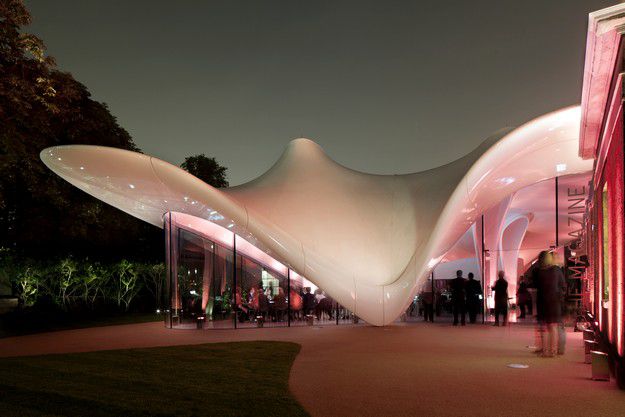 - Height: 8.95m from the ground at the building’s highest point Find also on ArcStreet the "Maxxi Museum" project by Zaha Hadid, just clic on the picture to see more.